The Spruce Cliff Community is part of a new city lead land use planning initiative, the Westbrook Area Plan – short and long term impacts to the community will be influenced by the outcome.

Spruce Cliff since 2016 has had 68% growth and set new peak population numbers year over year;  without a statutory Area Redevelopment Plan ( ARP).  This stellar performance on that measure, exceeds the cities targets to have 50% of new city growth in the developed areas of the city.  We are a community that has welcomed many new residents and collectively managed a lot of change.  We anticipate; that in the communities evolution / future there will be even more  growth than the 2007 land use zoning allows today.

There is a working group of  Spruce Cliff residents (3); that the city selected from a self identified group of volunteers interested/ willing to participate in a more hands on role in the workshops taking place through late 2019 & early 2020.   There are also reports; on the City of Calgary website   https://engage.calgary.ca/westbrook  updates about “What We Heard” to date ( Feb 2020) from the broader area of  the collection of communities. 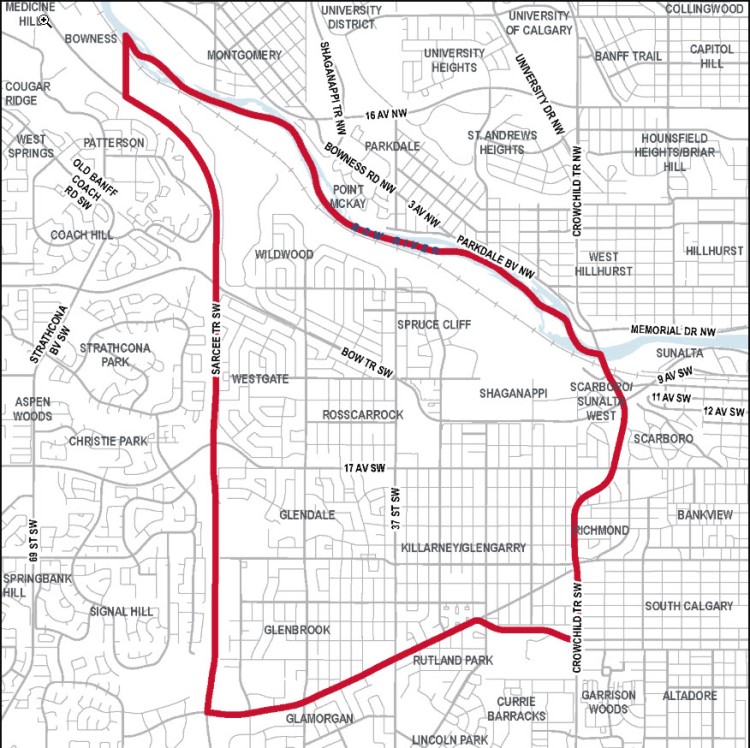 We encourage all, who call Spruce Cliff  home,  to engage in any/all of the opportunities, to keep informed about the progress of this project and watch for feedback opportunities/ proposed  recommendations/ conclusions  over the summer/fall of 2020.

The City of Calgary Website http://www.calgary.ca/CSPS/Parks/Pages/Locations/SW-parks/Douglas-Fir-Trail.aspx does mention that “Because of extremely icy conditions, the trail is closed in winter and early spring.”  A map posted at one of the entrances to the trail also advises of pathway closure during winter.

Douglas Fir Trail lies between Lawrey Gardens and Edworthy Park on the south bank of the Bow River.  It consists of wood walkways and stairs and a look-out point known as “dead man’s drop”.  According to the City of Calgary website http://www.calgary.ca/CSPS/Parks/Pages/Locations/SW-parks/Douglas-Fir-Trail.aspx Douglas Fir Trail is also known as “the drunken forest” due to the leaning of several trees. Some of the trees in the Douglas Fir Trail are up to 500 years old.

Bring your binoculars or cameras so that you can see, and digitally capture, Red and White-winged Crossbills, Ruby-crowned and Golden-crowned Kinglets as well as woodpeckers.

Quarry Road Trail is open once more though the City does not clear the trail of snow during the winter months.  Also watch for signs warning of safety closures depending on ice and snow conditions.

Quarry Road Trail connects Edworthy Park and Douglas Fir Trails. According to the City of Calgary website, Quarry Road Trail was previously used as a haul road to transport sandstone to the Canadian Pacific Railway Tracks during the late 1800s and early 1900s.

Project progress in pictures – the Community Association continues to advocate for some improvements to the conditions at the trail head off of Cedar Crescent.

Calgary CTV News posted a story on October 24, 2016 advising that the city has sold the former Ernest Manning School site to Matco Development Corp. According to the news story Matco has indicated it will build a transit-oriented development with office, residential, restaurants and community amenities. The story goes on to indicate the development is part of a larger Westbrook Village project that has been proposed for the area between Bow Trail, 17th Avenue, 33rd and 37th Streets S.W. See the story at https://www.calgary.ca/PDA/pd/Pages/Planning-and-development-resource-library/Publications.aspx